How can we work together to unlock the potential of empty buildings and buildings at risk?
What part can community led and grassroots initiatives play in revitalising our town centres?
What are the benefits to owners of different approaches to working with stalled spaces?

On 7 September 2016, The Lab hosted Stalled Spaces, the inaugural meeting of the Empty Property Owners Club Haverfordwest (EPOCH). Invited speakers and 30 members of the public came together to explore different approaches to unlocking the potential of empty buildings.

The event grew out of a piece of work undertaken by Gitti Coats, a freelance researcher who instigated the EPOCH project through the Ideas Lab in February 2016, with her proposal to develop a register of empty properties in Haverfordwest.

Opening the discussion, Gitti Coats described her idea for EPOCH as:

‘A membership club that links owners of empty buildings, with ways to make their buildings part of a recovering town centre […] Bringing buildings back into public use, increasing footfall, and raising the value of empty properties for their owners.’

Download Gitti’s presentation on the progress she made with EPOCH and proposed recommendations for a ‘regeneration model with substance and teeth’, here.

Jonathan Powell, shared his experiences of meanwhile uses in Swansea High Street’s empty properties, which were central to the story of Elysium: ‘an artist led, not for profit, social enterprise comprising of 60+ studio spaces and a contemporary art gallery over 3 venues in Swansea City Centre.’

Beginning as Exposure gallery in 2003, Elysium will celebrate it’s tenth birthday in 2017, and in that time, it has occupied many disused spaces, from a disused brothel to a Victorian Doctor’s house (rumoured to be a suspect in the Jack the Ripper murders).

Sharing the lessons he has learnt from meanwhile use and the relationships Elysium has developed with private landlords, Jonathan highlighted the need to incentivise landlords to open up their spaces to community-led initiatives.

Download Jonathan’s presentation which demonstrates the various ways Elysium has worked with stalled spaces here, and follow Elysium’s story and the various sites and spaces it has occupied here.

But where to start a similar process of community ownership in more rural areas, and on a smaller scale? Through his experience working with various rural communities in rural Wales, Cris Tomos demonstrated how the community finance and social benefit generated by community owned assets can become a catalyst for future developments.

He outlined different ways to engage communities to take action in regeneration and raise the finances to sustain a community owned space. Using case studies, Cris explained the different routes to financing sustainable community ownership of spaces, including: Crowdfunding, local cooperative share offers and peer-to-peer loans within the community for initial funding, and the importance of ongoing income generation. 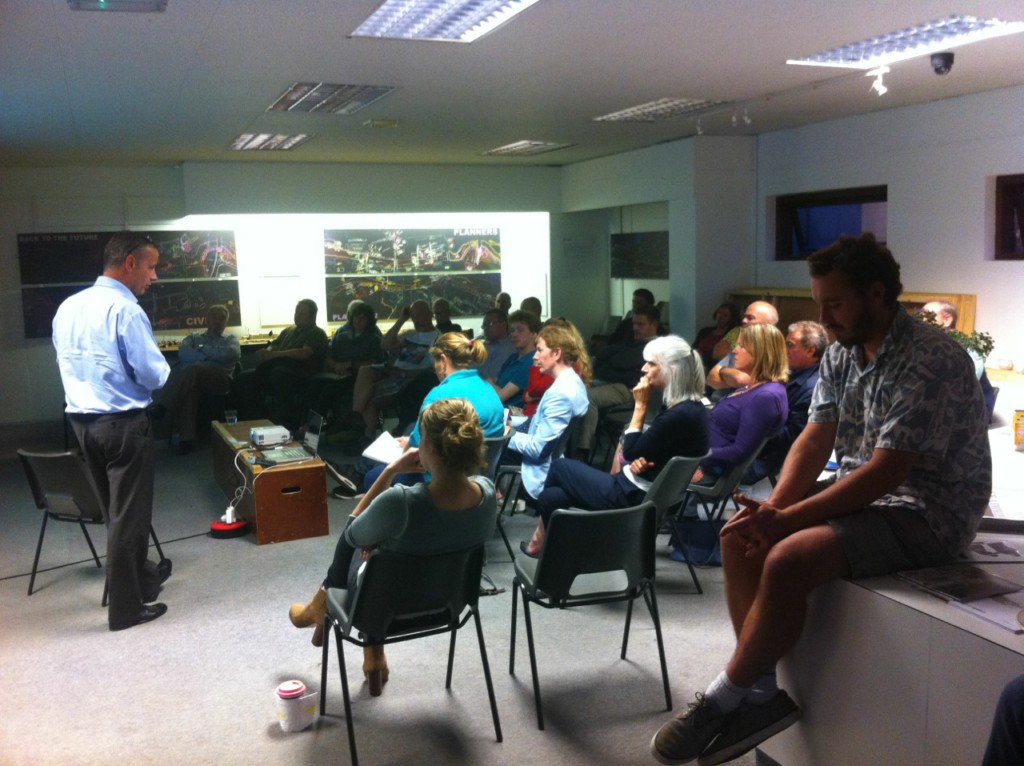 Alongside the significance of community mobilisation in acquiring and using stalled spaces, Martin White outlined the role of the local authority in enabling regeneration by supporting financial bids through town teams, action planning and masterplanning processes, which can be downloaded  here.

During the discussions that followed, the audience were keen to draw on the experiences of all the speakers and develop the ideas that had been shared to explore the possibility of applying similar models of community ownership to buildings in Haverfordwest.

With so much enthusiasm, it’s no surprise that all of those asked on the night said that they were positive about the future of Haverfordwest.