As part of PLATFORM, a programme of contemporary artists’ film was screened in the former Archive Office, Castle Street, Haverfordwest, SA61 2EF.

Ruth Jones Vigil 2009 / 04:32
Explores Strumble Head lighthouse as a threshold place, situated between land and sea, day and night and human and animal kingdoms. Using Strumble’s regulated light pattern as a guide for editing both picture and sound, the film invites a quiet contemplation of the internal and external rhythms that influence our daily experiences, rituals and memories.

Seán Vicary The Nose 2016 / 03:59
An old woman lies in a care home at the end of her life, the fragrance of flowers momentarily unlocks forgotten childhood memories. An autobiographical journey through the poetic landscape evoked by the physiological process of olfaction, created as part of the collaborative Art and Science project ‘Body of Songs.’ With music by Sam Lee and Llywelyn ap Myrddin.

Seán Vicary Taxonomy 2015 / 02:34
A fictive exploration of the life and works of Victorian naturalist Edmund Selous that considers ideas of data collection, surveillance and industrialised violence. Selous’s life is used as a metaphor for our human-centric viewpoint and continued valuing of the quantifiable above the subjective when dealing with the natural world. Music and sound design by Richard Lewis.

Simon Whitehead Hwyrgan (by the late hour) 2007 / 09:00
A figure walks through a twilit Pembrokeshire valley, through darkening urban space to the sea. Directed and performed by Simon Whitehead, camera and editing by Philip Cowan, sound by Barnaby Oliver. A Chapter, Cardiff commission and part of Simon Whitehead’s ‘walks to illuminate’ project, 2004-2007, www.untitledstates.net

Jacob Whittaker Tying Tone Arms 2006 / 02:42
A nostalgic look at found and faulty hifi equipment, questioning our sentimentality and reverence towards both music and past technology. This study of a fundamental part of Jacob’s composing process is accompanied by a mix of randomly selected loops from randomly selected records. Made in response to a call for short films on the theme of restriction and first shown as part of the Real Institute’s ‘Really Restrictive Shorts’ event, Llangollen, 2007.

Jacob Whittaker Shaky 2007 / 03:22
Looks at a particular fault of an old Alba hifi found by a friend of Jacob’s some years ago. 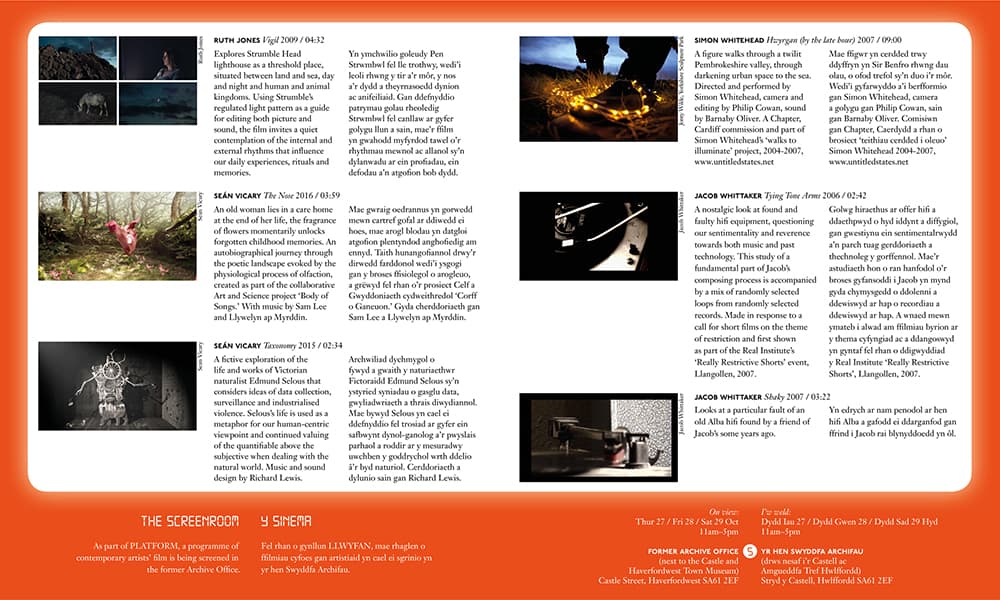 An imaginative two minutes of story-telling. A real treat, thank you.

Lovely mix of films – very enjoyable. Thank you for the journey.

Loved the change of lights and sound, Felt it lasted longer that it did. Amazing, really enjoyed!

I found the event to be engaging, that it occurred
in some interesting sites and these revealed parts
of the town that I was previously unfamiliar with.
It was good to show some work here and to connect with another
local creative community and I would like to consider
how to bring more work here in the future. Perhaps something
performative that could respond to aspects of the town over
time – Simon Whitehead