Pembrokeshire Drovers is a socially engaged, site -responsive moving image artwork that draws on and reflects upon the interrelationships between Haverfordwest and the rural and coastal hinterland it serves. – Karen Ingham

The commission was planned in collaboration with Pembrokeshire Coast National Park Authority, who provided officer time and a venue for the installation, which gave the opportunity for a longer and wider engagement with the surrounding county. 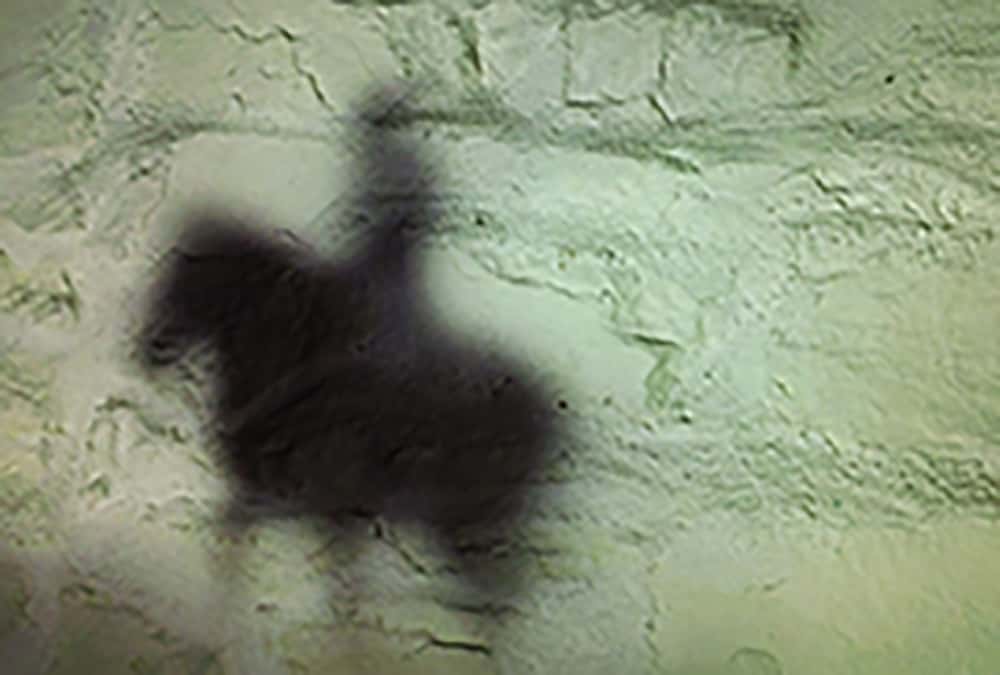 Pembrokeshire Drovers refers to the bygone practice of herding livestock to market and the historic routes through Pembrokeshire along which cattle and livestock were taken to Haverfordwest, and then onwards to the English grazing grounds and markets.

The theme of the drover figure (the original ‘cowboy’) and the interrelationships between the drover, the routes, the town, and the act of journeying (in a sense moving from past to present) is central to the conceptual approach. – Karen Ingham

The film was the artist’s response to a brief, which  took the historic subject of the Drover as the means of exploring the rich, symbiotic relationship between the County Town and the surrounding county in the past, and in the present. brief gave scope for a wide interpretation that allowed the artist to:

‘…immerse themselves within place and work collaboratively with people to produce an artwork which responds to the relationships and associations, historical and/or contemporary, between Haverfordwest and its rural and coastal hinterland.’

The film is structured around a series of journeys: road, track, waterway and foot, radiating out from Haverfordwest into the surrounding rural and coastal hinterland and defined the drover’s roads as‘a kind of palimpsest, like an old wax tablet that is constantly re-written anew yet leaves prior traces of history and meaning’. The interrelationships between the Drover, the routes, the town, and the act of journeying, and the changing nature of journeys form the past into the present are central to the work.

Ingham began her initial research in January 2016 exploring, destinations and routes along the drover’s roads across the county. Some little more than ancient trackways, others now the modern equivalent of busy highways. Throughout March, and April she undertook film shoots and extended her research with visits to the County Archive, and to Scolton Manor Museum, where she met with the Collections Manager Cait Hilditch to view the beautifully conserved collection of photographs that convey town and country life in the area in the 1800’s. A visit to the Haverfordwest Mart livestock auction held every Tuesday morning in the Mart ground in Bridge Meadow gave an atmospheric insight into what used to be a staple and highly visible event in a bustling Haverfordwest that was famous for its livestock fairs. Ingham also met with local livestock farmers such as Dr Sarah Beynon whose family have reared the iconic Welsh black cattle on their farm near St Davids for generations, and have historic links to droving. 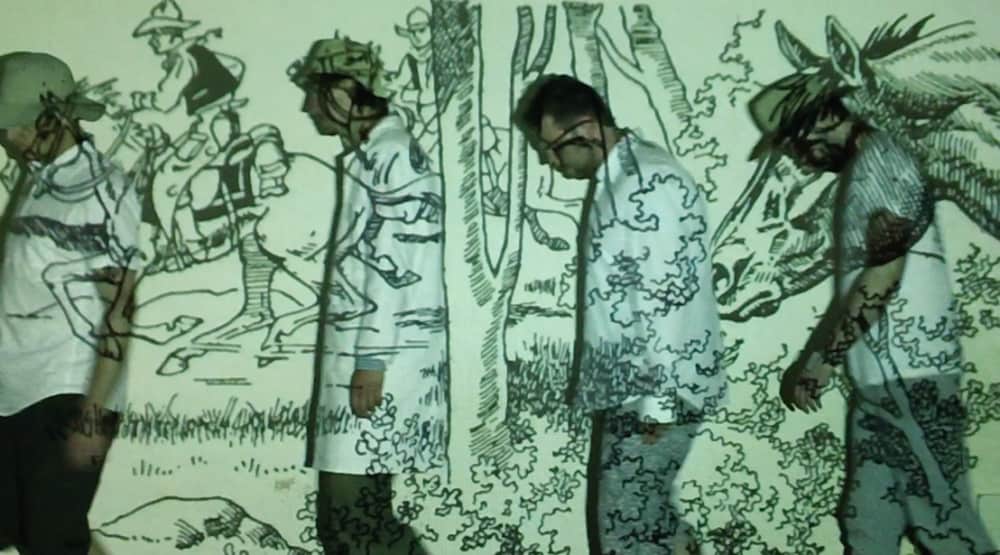 In early June, Ingham hosted a public engagement event that gave the local community the opportunity to take part in a  ‘Drovers Living Screen Experiment’. The original plan was to create an outside event near the Old Bridge in the town centre, which forms part of the original drovers road in and out of Haverfordwest. However, due to the summer evening daylight level the participants, dressed a drovers, were asked to move inside N0. 2 Old Bridge, where Ingham filmed them walking across , and then backwards and forwards through projected film clips from ‘Pembrokeshire Drovers’ and cowboy cartoons. The resulting short film was screened alongside the main Pembrokeshire Drovers film.

Pembrokeshire Drovers was first shown during Haverfordwest festival week (23rd-29th July) 2016 in  No2. Old Bridge, an empty shop in the town centre, and was warmly received by visitors from the town and further afield. Opening times were advertised in the Festival week programme and the press, and the installation was curated during opening hours with the help of volunteers (to whom we are very grateful). The screening and accompanying  installation, consisting of a series of still photos and interpretation panels, was a visible presence for contemporary arts in the town centre – perhaps for the first time. 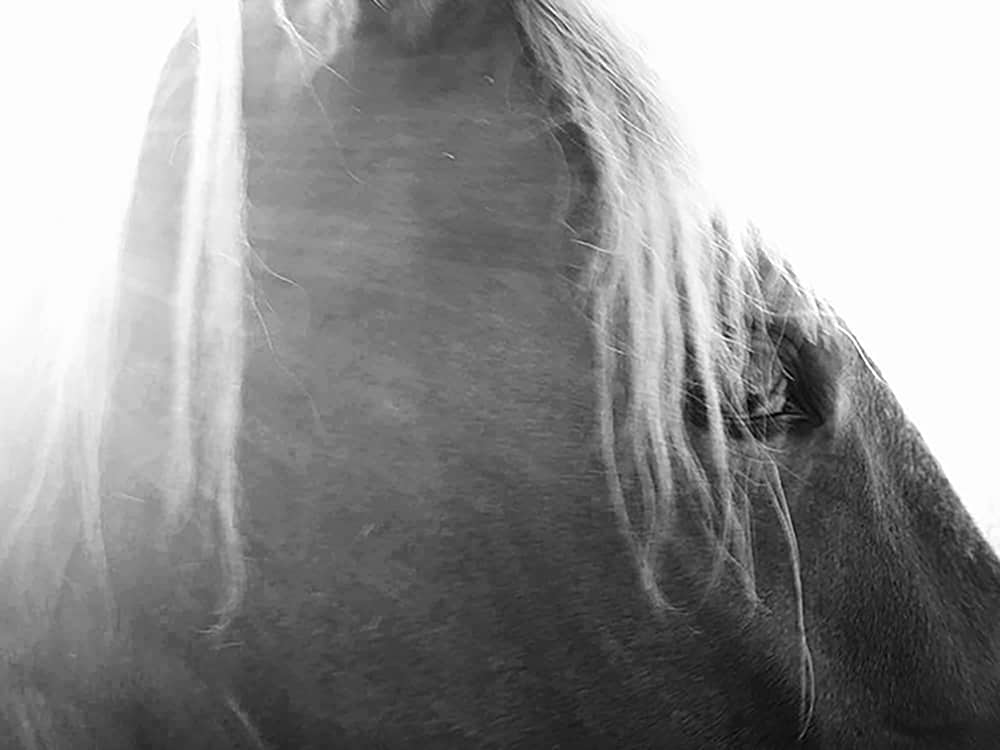 The exhibition in No.2 Old Bridge was easily accessible to the public, and gave local people and visitors to the town the opportunity to ‘drop in’ and view the work, or to come back when they had more time. This ‘light touch’ approach successfully demonstrated how, with the support of the landlord, in this case Pembrokeshire County Council  (a partner within the Confluence consortium), redundant retail space in town centre buildings can be utilised and ‘re-purposed’ making an  asset  in terms of the ‘offer’ for visitors and users of the town centre.

Lovely video beautifully filmed. Cowboys! My mum sold her three cows to come to Britain. She was very attached to them and often mentioned them. (Swansea)

Very interesting – the drovers came through our village too – hence 12 pubs for 500 inhabitants! The ‘Garden Girls’ also walked with the drovers in Spring and Autumn. (Llangadog, Carmarthenshire)

Interesting as great grandfather was a drover who came over to Pembs from Brittany. (Little Haven)

As a County town Haverfordwest has always been the centre of life in Pembrokeshire but also historically, has been a penultimate resting station for travellers making the pilgrimage further West to St Davids. After festival week, the screening/ installation moved on to Oriel y Parc, St Davids, where it was shown in the gallery space throughout August 2016. Housed in a striking modern building at the entrance to the city Oriel Y Parc is Pembrokeshire Coast National Park’s  flagship gallery and visitor centre. During the Summer visitor numbers to the gallery are at their peak as St David’s remains a popular destination for tourists and visitors to Pembrokeshire. The audience numbers recorded reflect this, and it was estimated that 3,800 people saw the film installation in Oriel y Parc.

A fascinating and creative and educational journey!  Am very glad to have to have seen this work!  Thanks. (Croesgoch)

Great to see such a nice tribute to the past drovers and today’s ‘tourist’ drovers.  Great work.  (Mathry)

So very interesting, a glimpse of my great-grandfather’s Pembrokeshire home.

Pembrokeshire Drovers can be viewed via Karen’s Youtube channel here. (For the HD full screen version contact Karen Ingham through The Lab). An accompanying artist’s book, featuring research stills and revealing the context and concepts behind the work was produced as part of the film installation and is available to view and download here. To learn more about the process of creating the film and installation, you can visit Karen’s blog here: https://studiowestorguk.wordpress.com.

Very interesting. Thanks for definition of palimpsest – what an amazing concept which you have really captured with some lovely shots. After second viewing you can see even more of the layers. Thanks. (Hook)

Mesmerising! Great to see an empty premises used for this.