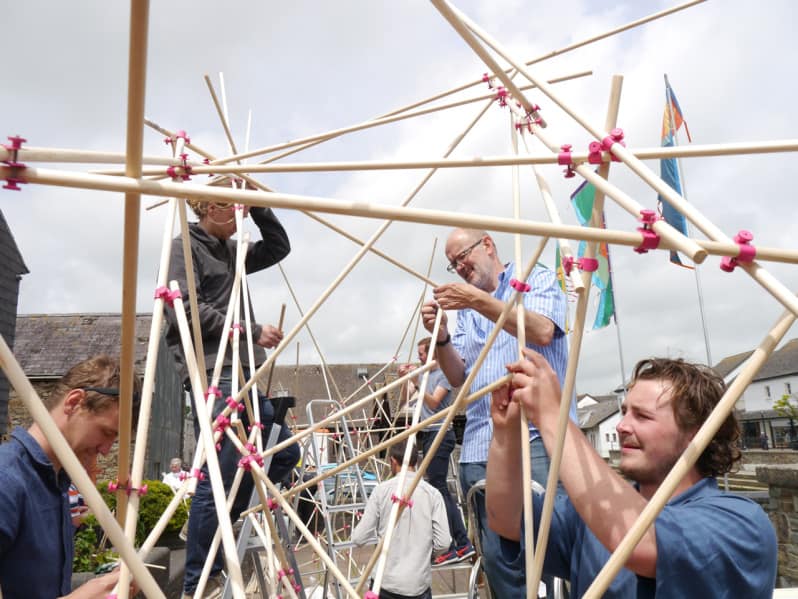 Visitors to the former travel agents in Ocky Whites were surprised and delighted to see the shop transformed into a pop up exhibition space and arts workshop called the Lab, which last week was launching and introducing a 3 year arts and regeneration initiative.

The week has been full of surprises. People couldn’t believe they were in Ocky Whites. It has been transformed from a travel agency into a multi-purpose space for workshops, exhibitions, talks and meetings. It was fantastic to see people trying out new things and to listen to people’s views on how the town has changed as well as hearing their ideas for the future. – Pip Lewis from spacetocreate, one of the 5 partners behind the initiative

On Whitsun Bank Holiday Monday, in her first official engagement, Sue Murray the town’s new Mayor came along with her consort to officially launch the initiative and celebrate the magnificent set of pageant-like flags that were flown throughout the week whenever events were taking place. 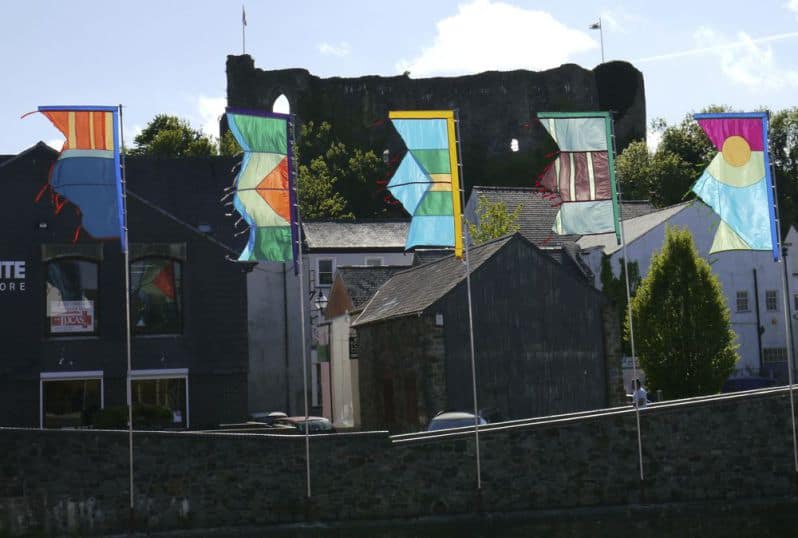 This is just the start of a very exciting three year project, and it’s great to be doing something different in the town. – Sue Murray, Mayor of Haverfordwest

From Drawing on the river and the incredible Freshwest construction workshop, through to My Kind of town – a guided walk with Gordon Gibson on Friday, the week-long programme had something for everyone.

Thursday saw the Lab opening from 10 am til 10 pm, beginning with the Big Map and continuing in the afternoon with Make you spot with a team of graphics students from Pembrokeshire College who worked together as Co Lab as a way of getting involved. The evening provided a chance to Show and tell by sharing  a story or a photograph of a place that is special in just a minute. A busy day ended with a screening of the Random story generator Haverfordwest, a projected artwork created by Davis & Jones out of the many conversations that took place with in and around Haverfordwest’s riverside in the days running up to the launch week.

We have been absolutely delighted with the numbers of people who came along during the week. The Lab is in a perfect location. Hundreds of local people and visitors of all ages joined in, taking part in creative activities both inside and outside the Lab. – Guy Norman, from spacetocreate.

Visitors included Helen Murray the Chief Officer of Planed, who took time out of her holiday on Wednesday to take part in the Freshwest construction workshop. During the Big Map on Thursday Dr Steven Jones, Director of Development dropped in and stayed for a lively discussion with the International Urban Planner Gordon Gibson.

This was just how we imagined it, only better. The Lab is all about making a space for people to meet outside formal structures and the usual channels. – Chris Evans from iDeA Architects, another of the partner organisations.

The success of the launch week was in part due to the fantastic voluntary commitment made by a talented team of local young people, many of whom are recent graduates from some of the UK’s leading Art and Design Institutions. -Rhowan Alleyne, Project Support Officer with Planed, the project lead organisation

There was a great atmosphere. The Lab is just what we need to open up the lines of communication between different organisations. We can use this opportunity to draw together people’s experiences and ideas to inform a positive vision for the county town. – Roland Keevill, Manager of the Riverside Shopping Centre and a representative of the Chamber of Commerce on the 4C’s town team